With the help of his 19-year-old son, who was diagnosed with severe autism as a child, engineer Enda Dodd’s Galway-based startup provides an innovative autism speech- and language-learning program offering hope to families worldwide. Enda and Valerie Dodd’s innovative software solution, ALL, is named after their company, Animated Language Learning. It is driven by the belief that they can change the world for children with autism and their families.

Since its inception in 2016, ALL has been adopted by 300 families and schools in Ireland, Europe and the US and is on track to reach its 301st customer and far beyond that number by the end of 2017.

Based at NUI Galway’s Business Innovation Centre, ALL is an effective autism speech and language learning program that has already lifted the Dodds’ 19-year-old twin sons Conor and Eoin from the isolation of autism, and is making it accessible to every family in need.

Teenager Conor Dodd, diagnosed as a severely non-verbal autistic child, now teaches special-needs children to communicate and is working on developing the ALL program at the family business on campus at NUI Galway. In this extraordinary story of hope for families of children with autism, Conor’s journey and what his future holds is an inspirational one.

Trapped in his own world

Conor’s world began with him being unable to communicate with the rest of the world, despite clearly understanding people. In a desperate move, his family relocated to California in the hope that a solution could be found there. Like many children with autism, he was trapped within his own world, unable to escape and frustrated that no one could hear him. Now a 19-year-old adult, Conor has achieved the impossible through the help of Disney animated films like Toy Story and the family businesses’ Animated Learning Language program.

As a child, Conor was diagnosed with a particularly severe form of autism that included deafness, cognitive deficits, profound language disorder and global dyspraxia. Any of these conditions would have left Conor with communication deficits but in combination, his condition was viewed as hopeless.

And yet, deep inside, his parents felt he showed determination and abilities if they could just reach him. It took Conor and his equally autistic brother Eoin to show their parents how to turn hopeless into hopeful through their interest in all things Disney.

Notwithstanding the successes to date, Enda Dodd is thoughtful about the road ahead. “There are millions of language-deficient children and adults around the world. We now understand how we can address these conditions in terms of process, but have an enormous amount of work to do to scale the solution globally,” he said.

This is complicated by the fact that there is no clinical consensus about the true nature of these conditions. Diagnosis is through the identification of relevant symptoms without having any clear understanding of clinical root cause. Compounding this, traditional test methods in the identification of these conditions are limited by the child’s inability to communicate making calls on intelligence extremely difficult.

“In many ways, as an engineer and designer, I was very lucky to have landed near Silicon Valley,” he continued. “Not just because Pixar and Adobe were there, but because of how they approach the solving of intractable and amorphous problems.”

Clinically there was an acceptance that standardised testing told little about the child beyond a basic diagnosis. The trend among the thought leaders was all about studying the child where they felt most secure: in the home. The most important information about these children rested with their parents. This was largely contrary to the industry, which tended to demand reliance on standardised evaluations.

“Learning this, combined with the belief that our boys were intelligent but trapped, gave me the confidence to bring the boys home and start working directly with them,” Enda explained. “But I was out of the Fortune 200 that I’d previously worked with, and we were living on some stock we owned and funding from friends to make ends meet from month to month. 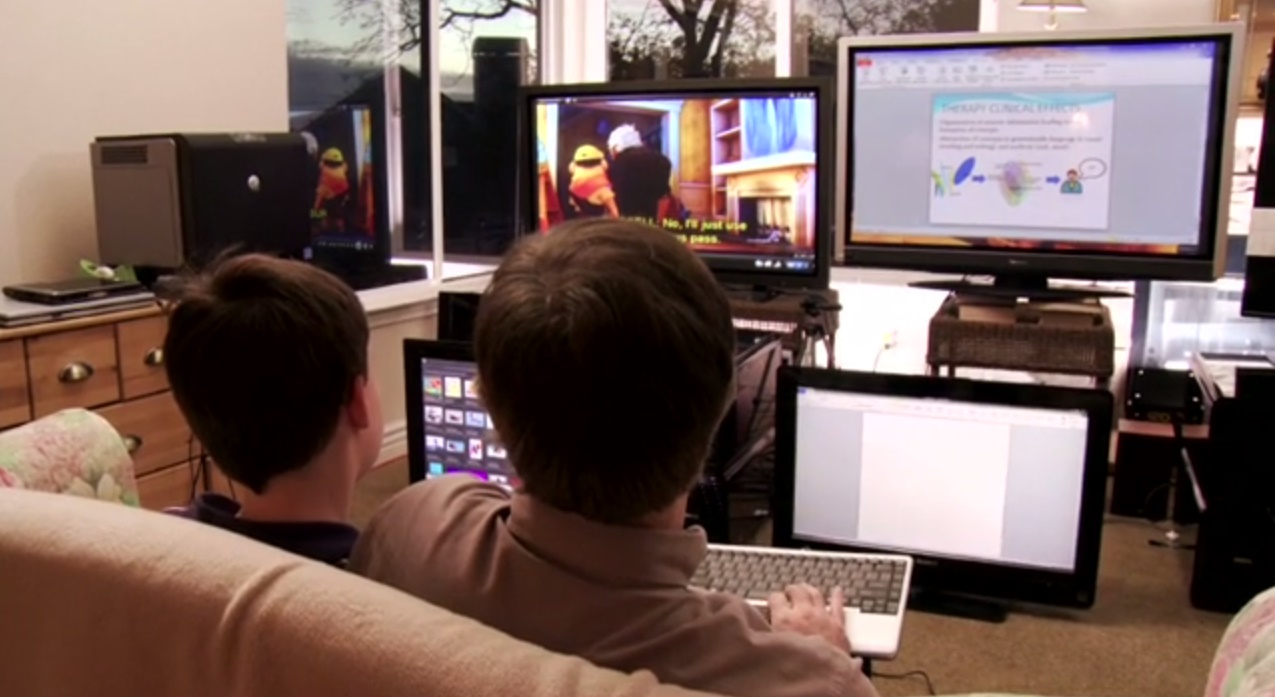 “Still, Silicon Valley was full of people innovating in the same way and I learned quickly about how to prototype software and technology on a shoestring. Additionally, developing human potential, communication, is not a static event but rather an evolving process. The solution had to be able to evolve with the child, through tracking progress and making real time adjustments. Everything had to turn on a dime.”

It was complicated, but adopting a fundamental change in approach from the norm made it all possible. Rather than attempt to treat the child through speech, Enda used visual animated media. “It seems so obvious now,” he said. “There just was no way in verbally and yet the boys were continually adapting to their world. They had to be doing this visually and that was the key.

“Because of where we were, there was an abundance of studios both large and small creating all manner of visual stimulus feeding into the entertainment industry. As projects would closeout, these systems would be sold on e-bay for pennies on the dollar with software application that I could have only dreamed about at the time. This is how we discovered Adobe and their participation soon followed.”

And so, over time in the Dodds’ own living room, a cacophony of tech grew up and evolved with the boys, while Val drew chalk marks around the house designating tech-free space. The boys blossomed. With communication, frustration and anxiety just melted from their lives and the family’s frenetic existence slowly moved towards what most people call ‘normal’.

Return to Ireland to develop the program

So much so that returning home to Ireland to build out the discovery was the obvious decision to make. And NUI Galway proved to be an excellent base to continue the journey.

Having discovered how to develop the boys’ communication through using Disney media, Enda Dodd built a multinational research team to make the solution available to parents around the world. One evening, he was building the technology at home with Conor. Tired from a long day, he stepped away from his computer to take a break. When he returned, Conor was sitting at the keyboard programming language concepts effortlessly.

From that day forward, Conor emerged as a key contributor to creating the language-learning content which is now being used by hundreds of families around the world. With the support of Disney and Adobe, the Dodds have worked tirelessly on this new concept developing the ALL solution for families and teachers of children with autism. Conor is particularly adept with computers and very determined when he sees a challenge in front of him.

The enormity of what Conor is doing is not lost on his parents as they speak about what a typical day might have been for Conor: hospitalised and unresponsive because of the severity of the condition, attending clinics, seeking private schooling beyond their financial reach, ultimately unchallenged and unfulfilled. Today, the contrast with Conor’s activities could not be greater: from working in the family business on campus, developing and programming their animated language learning platform, to running with the Galway City Harriers, sailing, playing tennis and enjoying his new life on campus at NUI Galway. He has been overwhelmed with the support students and staff at the University have shown him in learning new skills.

“For Conor to have overcome profound communication disabilities was a miracle in itself,” said his proud father. “And for him to have dropped out of school to become a leader in language development research is just beyond anything we could have imagined.

“Conor’s time at the university just lights up his day and there’s just so much opportunity for growth both professionally and personally. We owe a great deal to the Business Innovation Centre and its leadership in making our presence here a reality. Conor has flourished since our arrival on campus and he’s now a very happy, fun-loving person.”

At the Business Innovation Centre, Conor works with his father and a small team of language researchers. He is focused on the creation of language-learning programs for children who cannot communicate as he once could not as a child. Employing media from Disney and specialised tools provided by Adobe in Silicon Valley, he is changing the world for children with autism. Fiona Neary, business development manager in the Business Innovation Centre at NUI Galway, commented: “Companies come and companies go, success and failures are close at hand with all start-ups, but the sheer determination of the Dodd family will ensure ALL is around for a long time to come, helping families all over the globe.

“They understand that to be truly successful, you never give up. Through their product, they’ll continue to change the lives of families with autism. NUI Galway Business Innovation Centre is truly inspired by their work and 100% committed to supporting this family business.”

Dr Patrick Farren, lecturer in the School of Education at NUI Galway, said” “As a language educator, I’m excited to be part of a team working with Enda and his family on creating cutting-edge, interactive platforms that support language acquisition, (meta)cognitive and emotional development. What he has achieved to date is amazing.”

To order a program and learn more about ALL, visit: www.animatedlanguagelearning.com.